The closer we get to the US presidential election, the more frequently we hear, God, bless America. I’ve been embarrassed about that phrase all my life, because I’ve never known what God bless America (GBA) actually means. GBA is used variously as a statement of fact, a prayer, a wish, or a blessing. I think I’ve finally got it figured out… and God bless America is none of the above.

At first glance, GBA looks like a statement. But to make that work, you’d have to say, “God blesses America.” GBA sounds more like a command—a phrase generally spoken in an impressively commanding tone—as if to say, “God, I command You to bless America.” But no one commands God, right? Not even the people who claim to understand Him or His will.

Many people agree that God bless America is a fervent wish, a longing, or a prayer. If so, it sure is a strange prayer—intoned as it usually is, with fierce belligerence and/or an ear-to-ear grin. When spoken like that, God bless America can sure whip up an audience. Crowds of thousands respond to GBA with unbridled cheers of affirmation, and genuine tears of relief. And that’s the key to what GBA really is. It’s nothing so high and mighty as a prayer, a command, or a statement of fact. God bless America is a slogan. I mean, duh! 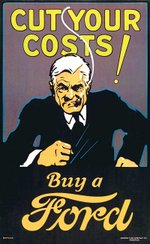 Saying “God bless America” is like saying, We bring good things to life (General Electric), M’m! M’m! Good! (Campbell’s Soup), or One day at a time. (Alcoholics Anonymous). My favorite slogan is Three Word Chant, used by anarchists as an anti-slogan.

Slogans are designed to stay in your mind, change the course of your life, or buy the party line. Slogans are designed to replace consciousness and compassion. In the dystopia of George Orwell’s 1984, audiences of thousands respond with tears and cheers to the Party’s three slogans: War is Peace; Freedom is Slavery; Ignorance is Strength.

But GBA is tricky slogan. God bless America is ambiguous enough to allow speakers and audiences to inject any number of ideological subtexts. The most common subtext to GBA these days is the ideology of the Radical Right Wing. So, whenever I hear a audience cheering to God bless America, I hear the silent but ever-present subtext: God curse the freaks—especially, but certainly not exclusively—sex and gender freaks. 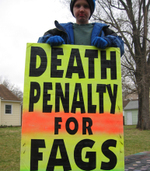 The belief that God curses the freaks makes life less worth living for a lot of people. Fat kids and geeks are beat up in school. Lesbians, whores, and faggy gay men are harassed, raped and sometimes killed. Trannies are murdered with such frequency that the only official tranny holiday is a day that commemorates our dead, Transgender Day of Remembrance. God may bless America, but if you’re a freak, then God fucks you in the ass. (Oh wait, that’s not necessarily a bad thing.)

To their great credit, the vast majority of respected religious and spiritual leaders decry the idea that God curses the freaks. Virginia Mollenkott and other religious scholars, have gone to great lengths to articulately de-bunk any reportedly sanctified homophobia, racism, classism or most any other -ism that is rightly or wrongly attributed to the canon of some of the world’s big religions. Nevertheless, GBA successfully fans the flames of hatred of and violence against freaks. Well, here’s what I’ve learned after sixty years of life as an American: God bless America is a big fat lie.

God doesn’t bless America, and what’s more He never has. The word America appears nowhere in the Bible, the Koran, or any other ancient religious text that claims to be the sole source of God’s words. Both the Church of Latter Day Saints and the Church of Scientology have interesting things to say about America in their scriptures, but even within the canon of these modern religions, God is neither blessing Americans nor cursing us. Not in any chapter or verse I’ve ever heard of.

Anyone who says that God blesses America is lying to you. God created the world. He did not create America. America was created by Puritans. GBA is a Puritanical slogan designed to make us afraid of God, Who—by the way—loves you, no matter who you are, who you love, or however you might kindly lead your freaky life. God loves you, too. That much is in the Bible.

When a political candidate or elected official invokes GBA as a slogan, we’re supposed to believe the lie that God would single out America amongst nations. Or the lie that God is blessing the wars we make on anyone who’s not a true believer. The lie that God curses freaks is imbedded in the slogan, God bless America, which if you haven’t noticed, has become a slogan that scares the poop out of me. So, I’m subscribing to another set of God-related lies and slogans. I’m completely enchanted with the religion, values, and beliefs of Bokononism—a religion that admits right up front that it’s a big fat lie.

What Is Bokononism, And How I Came to Embrace Its Lies 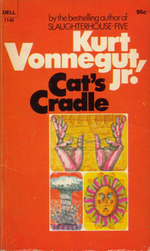 This past summer—the last summer under a G.W. Bush administration—my life ran into its own perfect storm of suicidal depression. My abdominal surgery coincided with sudden onset polyamory and writer’s block. Oh, woe was me! Oh, cursed of God was I! To keep myself alive, I re-read one of my favorite darkly comic novels, Cat’s Cradle, by Kurt Vonnegut, Jr. I go back to his books whenever I need to laugh my way through some suicidal misery.

In the novel, Cat’s Cradle, Vonnegut invents an entire religion, Bokononism. It comes complete with a prophet, it’s own language, a creation myth, and a perfectly lovely farewell to the dying. The Books of Bokonon contain enough proverbs—many of which are in the form of calypso lyrics— to get you through most any situation in your life. The religion is named for it’s founder, Bokonon who is also, to date, the religion’s sole prophet. Here’s the first line of the first verse in the First Book of Bokonon:

All of the true things that I am about to tell you are shameless lies.

What a great opener! A religion that admits it’s lying, right up front. Makes me trust ’em to keep their word—which you can see for yourself in The 14th Book of Bokonon, entitled What Can a Thoughtful Man Hope for Mankind on Earth, Given the Experience of the Past Million Years?. And the text, in its entirety, is:

If that’s a shameless lie, I don’t care. It makes sense, it makes me chuckle, and it gives me some comfort to read it. What more could you ask of a religious text? Here’s a calypso Bokonon wrote to explain how he came up with his religion.

I wanted all things
To seem to make some sense,
So we could all be happy, yes,
Instead of tense.
And I made up lies
So that they all fit nice,
And I made this sad world
A par-a-dise.

Bokononism is a religion of lies that shines a whole new light on the big, fat quasi-religious lie that God blesses America and curses the freaks. Bokononism might be a lovely stopover for you on your spiritual journey.