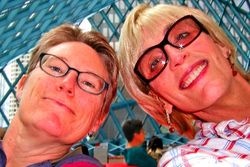 My BFF and co-author of Nearly Roadkill, Caitlin Sullivan (the two of us in this photo at the Seattle Public Library) just sent me this quote from Salman Rushdie's The Ground Beneath Her Feet.

Damn, I keep wrestling with this stuff and some people are just so frakking eloquent about it. Read it and weep for joy that we're not alone in our freakdom, not by a long shot.

“For a long while I have believed – this is perhaps my version of Sir Darius Xerxes Cama’s belief in a fourth function of outsideness – that in every generation there are a few souls, call them lucky or cursed, who are simply born not belonging, who come into the world semi-detached, if you like, without strong affiliation to family or location or nation or race; that there may even be millions, billions of such souls, as many non-belongers as belongers, perhaps; that, in sum, the phenomenon may be as “natural” a manifestation of human nature as its opposite, but one that has been mostly frustrated, throughout human history, by lack of opportunity.  And not only by that: for those who value stability, who fear transience, uncertainly, change, have erected a powerful system of stigmas and taboos against rootlessness, that disruptive, anti-social force, so that we mostly conform, we pretend to be motivated by loyalties and solidarities we do not really feel, we hide our secret identities beneath the false skins of those identities which bear the belongers’ seal of approval.  But the truth leaks out in our dreams; alone in our beds (because we are all alone at night, even if we do not sleep by ourselves), we soar, we fly, we flee.  And in the waking dreams our societies permit, in our myths, our arts, our songs, we celebrate the non-belongers, the different ones, the outlaws, the freaks.  What we forbid ourselves we pay good money to watch, in a playhouse or a movie theatre, or to read about between the secret covers of a book.  Our libraries, our palaces of entertainment tell the truth.  The tramp, the assassin, the rebel, the thief, the mutant, the outcast, the delinquent, the devil, the sinner, the traveller, the gangster, the runner, the mask: if we did not recognize in them our least-fulfilled needs, we would not invent them over and over again, in every place, in every language, in every time.”