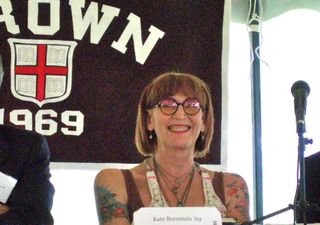 I was a hippy-dippy actor/director and stoner during my days at Brown, and this year I got an email from our class president. I’d been identified, he said, as among the most accomplished, illustrious, and interesting members of our class. Hah! And, he continued, there would be a panel discussion about how attending Brown in the 60s effected my life, and would I participate? Would I?!

So, this past Memorial Day weekend, I travelled up to Providence, Rhode Island to attend my first ever college reunion in forty years. My partner, Barbara Carrellas, did all the driving and courage-building. Other panel participants included: Ira Magaziner, chairman of the William J. Clinton Foundation’s international development initiatives; Cornelia Dean, writer and editor for The New York Times; John Rizzo, past and current Acting General Consul for the CIA; five other classmates: a banker, a scientist, a philanthropist, a judge, and me. I didn’t find out until the day of the panel that John Rizzo was referred to as the “Architect of Torture.” Yikes.

So, this is me talking to over 200 classmates and their families. They asked me to speak for 5-7 minutes. I came in at 6 minutes, 56 seconds. Barbara Carrellas flipped the video. Enjoy.